As it was impossible to hold our annual service of commemoration for Oliver Cromwell at the traditional venue by the Thorneycroft statue at the Palace of Westminster, the event was moved to another place with great significance for Cromwellians, the city of Worcester. The victory of the parliamentary army, led by Cromwell on 3rd September 1651, has been marked by the Battle of Worcester Society for many years, and they were very welcoming hosts.

A number of members met for coffee and at The Commandery in the morning, and a tour was led by the Chairman of the BoW Soc Richard Shaw. A wreath to honour all those who fell in the battle was laid by our President Professor Peter Gaunt in the garden of remembrance.

Worcester Cathedral provided a magnificent setting for our service which was held in the Lady Chapel , where we were welcomed by Canon Michael Brierly and was conducted by the Reverend Dr Tim Woolley. Gratifyingly the service was very well attended, with some members of the BoW Soc joining us along with some members of the public. The retiring collection was generously supported which helped to defray the costs of the event.

The day concluded with a drinks reception back at The Commandery followed the BoW Soc Drum Head service on Fort Royal. All in all a splendid day and many thanks to our friends in Worecester.

The Annual General Meeting was held on Saturday 28th April at The Friends Meeting House, St Giles’, Oxford. The business meeting was conducted efficiently and reports given by Council members on the activities of the year. Two new members of Council were elected to serve a three year term, David Woodall and John Gibbon. After the formal meeting closed there was an excellent lecture given by Vanessa Moir on Oxford and the Civil War, this was followed by a buffet lunch and a walking tour. Almost 50 members attended the meeting and enjoyed the day.

The title of this year’s study day, “Oliver Cromwell…why should we care?” was aimed to appeal primarily to those new to the subject, but in the event proved to be equally of interest to those with a long-standing interest in the subject. With an audience approaching seventy in number the Assembly Room in Huntingdon Town Hall was a splendid, if slightly stuffy, setting for the event, on a humid day at the beginning of June.

Each of the four speakers in the morning was restricted to a thirty minute slot, all of whom kept to the timetable. The afternoon’s panel discussion, very well led by James Blatch, was by most people’s judgement very successful, and opened up to questions from the floor. What the day proved is that there is always room for a general overview, back to basics, look at Cromwell and his career. With different speakers the same programme would probably work on an annual basis, and a different discussion and questions would result each time.

All of the contributors had kindly agreed to waive any fee so that the profits from the day could go to the Friends of the Cromwell Museum, who undertook the practical arrangements for the day, including the much appreciated lunch. The sum raised for the Friends was £1400 which will in due course be used to support a specific project at the Museum.

This year’s event took a slightly different form, being aimed directly at Sixth Form students rather than their teachers, though the latter no doubt gained a lot from the day! It was kindly hosted by St Paul’s Boys School who provided a welcome cool venue on a very hot day – no repetition here of Cromwell’s opening speech to the Nominated Assembly! It was attended by 120 students from 11 schools

The morning consisted of a series of debates looking at some key questions, with speakers putting forward contrasting arguments. The first was between Dr David Smith and Professor Peter Gaunt on the issue of why Parliament won the civil war. Dr Smith argued that Parliament’s control of London and the South East meant that its resource base, linked to its efficiency in exploiting this, meant that it was much more likely to win a protracted war. Professor Gaunt argued that in terms of the actual military operations there is no sign of the royalists losing due to lack of resources, but rather key decisions proved crucial – the failure to follow-up Edgehill and the ‘unnecessary ‘ battles of Marston Moor and Naseby. It opened up the difference between a ‘big picture’ systematic explanation and one based more closely on contingency and accident. 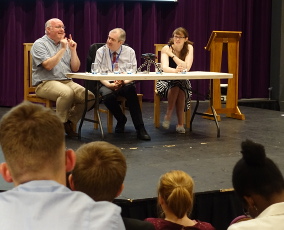 Who was responsible for the king’s execution? Debate!

The second debate, between Professor Jason Peacy and Dr Joan Redmond was on the issue of when regicide became likely, and on the comparative responsibility for it of Charles I and Cromwell. Both agreed that the trial and actual regicide were distinct, with a number of individuals supporting the former but not the latter. Dr Redmond saw Charles’ repeated refusal to plead, and so acknowledge the authority of the Court, as crucial, Professor Peacy felt that only with the sentence did regicide become inevitable and up to that point other outcomes were possible. 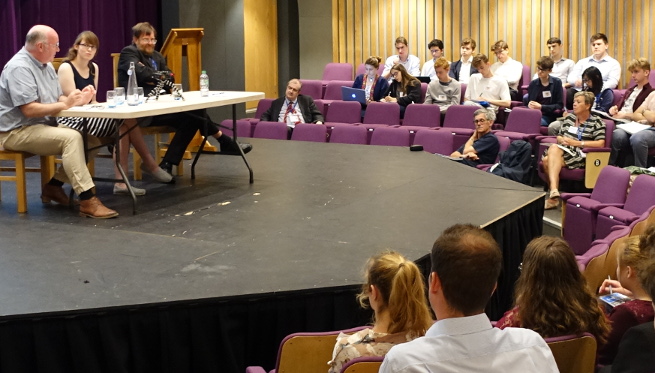 The final session, between Professors Gaunt and Peacy, looked at whether the Civil War should be seen as a national conflict or a series of interlocking local ones. The latter argued for close links between London and the localities and a strong awareness of national issues, while the former put the view that, at least in the distant part of the country local conflicts could be carried on, or avoided, with little reference or involvement by central authority.

The afternoon was given over to a number of source-based seminars looking at different aspect of the period. The ideas discussed here will be appearing on the Schools’ section of the Association website, along with audio files of the debates. All in all it was a most successful, interesting and enjoyable day, and thanks are due especially to Serrie Meakins for organising it, and St Paul’s for hosting the event.

Click to listen to the audio files of the School’s Conference 2018 debates.

Announcing the winner of the 2019 competition and details of the 2020 essay competition for ‘A’ level students.
Find out more…