Why did Parliament win the Civil War?

Why did Oliver Cromwell reject the offer of the Crown?

Was the Protectorate a military dictatorship? 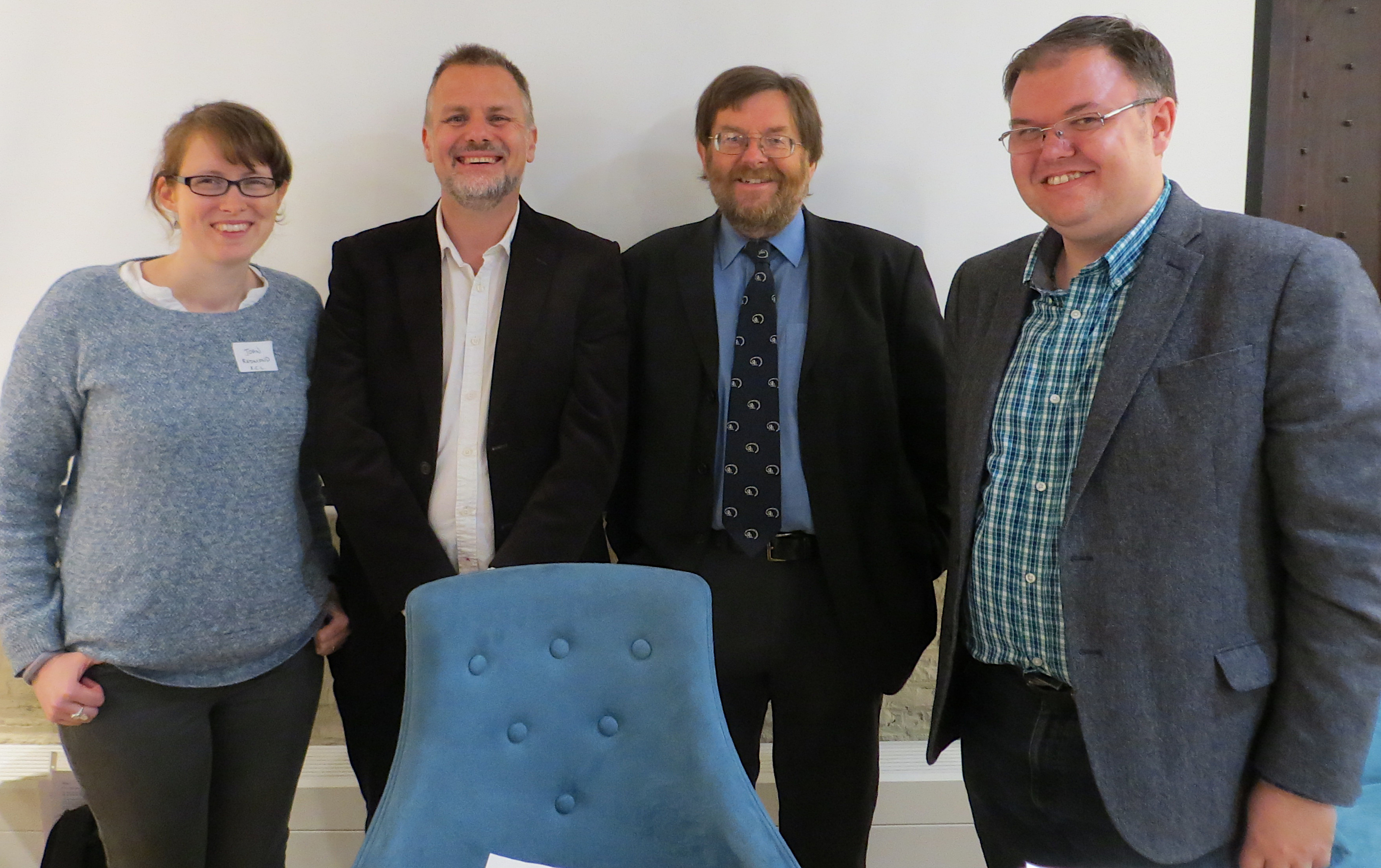 The Cromwell’s Association’s fifth annual Schools’ Conference took place at the end of June at the National Civil War Centre in Newark. The theme for the day was Revolution. Leading academics of the period debated three subjects in the morning, which was followed by four separate workshop sessions which they led.

Debated by Professor Hopper and Professor Gaunt, chaired by Dr Fitzgibbons.
How far did Leveller ideology really contribute to a radical change in
policy in either the army or the country at large?  Play

Given that Charles was called,
'This man against whom the Lord hath witnessed',
was his fate already decided before he was put on trial in
January 1649?  Play

Can we legitimately call the years of the mid-17th century
a period of revolution?  Play

The afternoon sessions all looked at contemporary sources and were aimed at developing skills and understanding in analysing and using original material. Each dealt with a different set of sources which are available here together with a brief note from the tutor.

There are no notes or commentary to accompany the documents, but it may be useful to know that as well as looking at specific contents of the documents – so issues of allegience in in the Salusbury letter, the outlook and public views of Charles I and the Earl of Essex, the memories and impressions of Gough, the viewpoints and experiences of Oglander – I tried to get the students to question whether all Civil War documents had the same value and to think about issues which affect reliability veracity value and so on. For example, Charles I’s speech delivered at Shrewsbury was almost certainly taken from a text prepared for him and we have lots of accounts of the fairly stock speech which the king delivered in the opening weeks of the war, while the far more personal and intimate Salusbury letter is a very rare glimpse into the factors and thoughts which lay behind determination of personal allegience; the Gough account is very colourful and feels immediate but we need to remember that he wrote it as an old man near the end of his life in the early eighteenth century and was recalling events which occurred when he was a young child decades before; and we have a number of accounts from contemporary commonplace books of the type kept by Oglander, but the particular value of this source is providing insights into the wartime and post-war conditions on the Isle of Wight (which otherwise is not very well documented).

Peter Gaunt is professor of early modern history at the University of Chester. He has researched and written widely on the post-war political settlement of the 1650s in general and on the Cromwellian Protectorate in particular. He is the author or editor of fifteen books, including studies of the civil war in Britain and Ireland, in England and Wales and in Wales alone and two (different) biographies of Oliver Cromwell. His most recent publications are The English Civil War: A Military History (I B Tauris, 2014) and new editions of the late Barry Coward’s The Stuart Age (Routledge, 2017) and the late Roger Lockyer’s Tudor and Stuart Britain (Routledge, 2018). He is currently completing a study of the personal experience and surviving first person accounts of the civil war entitled The Metamorphosis of War, to be published by Helion. Currently he is the President and a past chairman of The Cromwell Association.

Currently Professor Hopper is the lead academic on a major project which is examining Civil War petitions made by former soldiers and war widows to obtain a pension from the state. For full details see www.civilwarpetitions.ac.uk.

The students were divided into 6 groups and they had to appoint a spokesperson to represent their war victim as the most worthy of relief to the teachers (playing the part of the JPs) who had to judge and decide who got the one available pension (chocolate buttons). Transcripts of the six petitions studied are available to view online here.

Andrew Hopper is professor at the Centre for English Local History at the University of Leicester. After obtaining his doctorate on the extent of support for parliament in Civil-War Yorkshire at the University of York, he completed two postdoctoral fellowships at the Universities of East Anglia and Birmingham before going to Leicester in 2006. He is best known for his two monographs ‘Black Tom’: Sir Thomas Fairfax and the English Revolution (Manchester, 2007) and Turncoats and Renegadoes: Changing Sides in the English Civil Wars (Oxford, 2012). He has published four further edited volumes and fifteen articles in academic journals on civil-war topics. He is currently working on his third monograph Widowhood and Bereavement in the English Civil Wars. He is a patron of the Naseby Battlefield Project, and Academic Director of the National Civil War Centre where he was co-curator with Dr Eric Gruber von Arni of the Battle-Scarred exhibition.

Building on the session in the morning looking at the trial and execution of Charles Ist the session looked three different sources about this subject.

Download the source: The trial and execution of the King (Word .docx)

Jon Fitzgibbons is Senior Lecturer in Early Modern History at the University of Lincoln and a Trustee of the Cromwell Association. His publications include Cromwell’s Head (2008) and Cromwell’s House of Lords (2018). He is particularly interested in the political and constitutional history of 1640s and 1650s Britain, and has written several articles on the regicide and the nature of the English Revolution. He is currently completing a book on the topic of monarchy in Cromwellian Britain and is about to begin a two-year research project, funded by the British Academy, which explores the memoirs of the parliamentarian lawyer Bulstrode Whitelocke.

These sources examine interconnected events: the 1641 Irish Rebellion, and the English Parliament’s invasion of Ireland, led by Oliver Cromwell, in 1649. The Irish rebellion, documented through thousands of witness statements such as that of Elizabeth Price, extracted below, fed English imaginations of the cruelty and violence of Irish Catholics. Stories such as the Portadown massacre that features in Elizabeth’s deposition were in wide circulation in England in 1642, fuelled by many lurid publications, such as James Cranford’s ‘The Teares of Ireland’, which carried the woodcut image on page 2. These and other stories prompted calls for the conquest of Ireland and the elimination of ‘popery’ which had caused so much bloodshed.

The 1649 letter of Oliver Cromwell, detailing the capture of Drogheda, echoes some of these themes in a number of ways. The full letter is very interesting and revealing, but I have put some sections in bold to help with picking out the main details. In particular, historians have highlighted the phrase that the violence of Drogheda was a ‘righteous judgment of God upon these Barbarous wretches who have imbrued their hands in so much innocent blood’ – this has often been interpreted to mean the blood of the 1641 rebellion, and particularly the Protestants who suffered, such as Elizabeth Price’s family. However, there are competing interpretations, especially since Drogheda was a royalist town, and there was a detachment of English royalists there – could Cromwell have meant royalists in this comment, picking up on the imagery of Charles I as ‘man of blood’ in the lead-up to his trial?

Wider possible questions for discussion include the impact of Ireland on the Wars of the Three Kingdoms; the role of religion, and especially anti-Catholicism, in the conflict; the influence of broader European events, especially the Thirty Years’ War, in the reporting of atrocity; the rules of war in the early modern world, and especially the conduct of sieges, and whether Drogheda was in fact typical of such warfare; the legacy of Cromwell in Ireland.

Dr Redmond is a lecturer in Early Modern British History at Kings College, London. She studied at Trinity College Dublin and St Johns College Cambridge. Her PhD research, supervised by Professor John Morrill, addressed religious violence in Ireland between 1641-1660, investigating the phenomenon of sectarian violence and its relationships to religious and ethnic identities in early modern Britain and Ireland. Her publications include ‘Memories of violence and New English identities in early modern Ireland’ in Historical Research, Vol. 89, No. 246 (November 2016), pp. 708-729 and ‘Religious violence and the 1641 Rebellion: divided communities in seventeenth-century Cavan’ in The Undergraduate Journal of Ireland and Northern Ireland, Vol. 3 (2013), pp. 216-228.