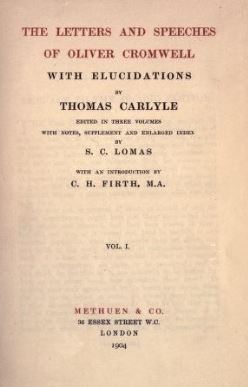 The collected letters and speeches of Oliver Cromwell have appeared in many different editions and versions since they were first published in 1845 by Thomas Carlyle. Carlyle’s fascination with Cromwell grew out of his interest in the concept of heroes and hero worship and he set out in the early 1840s to write a biography of Cromwell. The challenge proved too great and he deliberately destroyed his manuscript. He decided that the best alternative was to produce an edition of Cromwell’s own words and that is what he produced.

There are a total of 205 letters and 19 speeches reproduced here.

The work very quickly went through three editions. It proved to be very popular and helped to shape the image and profile of Cromwell in the second half of the 19th century. The work was to a large extent replaced as a source in 1937 by William Cortez Abbott’s edition of the Writings and Speeches of Oliver Cromwell but Abbott lacked by his own admission Carlyle’s ‘arresting style’ in the linking narrative text and interpretation.

A new scholarly edition of the letters and speeches is now in course of preparation by a team of leading academic experts and will be published in due course and will set a new benchmark for textual accuracy. In the meantime the letters and speeches available here, taken from the 2nd edition of Carlyle of 1846 and initially transcribed by Cambridgeshire Software House in 1999, provide a flavour of Oliver Cromwell’s own words.

The Cromwell Museum and the Cromwell Association are grateful to CSH for permission to use their transcriptions.